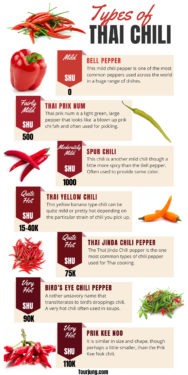 One of the problems with writing recipes for Thai dishes that are intended to be cooked by people in different regions across the world is clearly showing the level of spiciness of the dish.

There are problems with understanding the spiciness of the chilis that we use locally in Thailand which are not available in say the USA or the UK. There are also problems with the level of tolerance for spiciness which is a function of the amount of spice heat regularly consumed. Then there is the problem of locally sourcing a suitable substitute chili pepper.

We write recipes on this blog that are authentically Thai and medium spiced as an average Thai person might eat. This is likely to be much hotter than people might eat in areas where spicy food is not the norm. So we encourage everyone to adjust the level of heat to their own personal taste.

On This Page for You

Below you will find the main chili pepper styles used in Thai cuisine and in our recipes and give you substitutes that are similar in heat. You may be using dried chili or fresh and be using red or green chilies but you can use this guide to help you find a suitable replacement if you need one.

You are welcome to use the infographic above with a link back to tourjung.com – High Res Image Download Link

This mild chili pepper is one of the most common peppers used across the world in a huge range of dishes. They come in green, yellow, orange and red depending on how ripe they are when picked.

It has minimal levels of capsaicin and so is very mild, so much so it is often eaten raw with dips or in salads as well as stir-fried as a vegetable or added to stir-fries for color and variety.

The bell pepper comes in a range of colors, most commonly green, yellow and red with the color turning from green to red as the fruit ripens.

Although used as a vegetable or salad ingredient it is strictly speaking a fruit – much like a tomato is a fruit rather than a vegetable.

Bell peppers are used widely in Chinese food but a little less so in Thai food although still quite common.

They are used in pad pak ruam, or stir-fried vegetables, and in several other dishes. They add a lot to the visual appeal of a dish and are primarily used for that purpose.

Because the taste is fairly mild they do not add much to the taste of a dish but do add antioxidants and vitamins as well as making your dish look nicer.

Thai prik num is a light green, large pepper that looks like a cross between a blown up prik chi fah and a stretched out pale green bell pepper.

It is one of the mild chili peppers being a variation of the banana pepper with a little kick at the back.

About the same spice level as the prik chi fah.

is a mildly spicy pepper that is added to stir-fries as well as making Nahm Prik Num – a mildly spiced paste that is eaten in the north of Thailand with fresh vegetables, fried pork snacks or as a dip served with the main course.

It is also eaten stuffed with various fillings.

Best Substitutes for Thai Prik Num: Banana Chili or Bell Pepper (which will be a lot milder)

This chili is another mild chili though a little is more spicy than the Bell pepper. It is from the Capsicum Annum genus and sub-category Acuminatum fingers.

If you go to the local Thai market you will see these on every vegetable stand. Almost as thick as your thumb and about 5 or 6 inches long with a waxy finish to the skin. You can find longer and shorter ones of course.

Thai Prik Chi Fah transliterates to Chili that points to the sky, an apt name which derives from the fact that these chilies grow with their pointed ends pointed at the sky duh!

You can find these green, yellow and red, but red and green are more commonly used to add a little spice and a splash of color to dishes.

For this reason, Thai Prik Chi Fah is a great milder substitute chili pepper if you want to make a recipe a lot milder than a Thai would eat it. There is no shame in that!

This yellow banana type chili can be quite mild or pretty hot depending on the particular strain of chili you pick up.

Similar in shape to the Fresno pepper but a little smaller, it is used a fair amount in various Thai dishes where the level of spice is a little more time than usual.

Substitution depends on the spice level you want because of the wide range of heat this pepper can have.

Choose a milder or hotter pepper from the list to your preference.

Prik Luang is not quite as common as the red Jinda chili in Thai cooking but can be found making fried rice more colorful, in certain curries and soups and sliced and pickled.

It is quite a hot chili but not as hot as the Thai Jinda chili and is used to give some variety rather than for taste.

The Thai Jinda Chili pepper is the one most common types of chili pepper used for Thai cooking.

It is longer and milder than the bird’s eye style chilis which are used mostly in Thai soups and in the Schoville scale chart would be classed as hot chili pepper.

This is the chili to use unless the recipe specifies to use a milder or spicier style of chili. It is still a very hot chili to most people.

This chili is a Thai variant that is not so easy to find in the West but it is available online.

In my research for this article, I found a great deal of confusion over the names given to different chilies around the world. Not only that several websites were just plain wrong in the information given.

This is a hot chili pepper that is very commonly found in many Thai dishes.

Typically used up and down the country by Thai Street Food vendors because even though Thais love hot spicy food, the small bird’s eye chili is too hot for most people to eat most of the time.

The Thai Jinda Chili type of chili pepper gives a good balance of providing plenty of heat without it being just too hot for most people’s regular Thai food.

Sometimes we get a craving for super spicy food and will order our dishes ‘phet’ meaning spicy, in which case these Jinda chilies will be replaced with the spicier chilies that follow.

Moving up into the hot peppers scale we have the prik kee nok.

A rather unsavory name transliterates to bird’s droppings chili.

Although an unsavory name, it is quite apt and alludes to the fact that these chilies are eaten by birds which are immune to the effects of capsaicin, who then fly off and deposit the seeds all over the place in their droppings.

These types of chili peppers are given similar names around the world but the varieties and spiciness vary greatly.

The Thai Bird’s Eye Chili pepper is very hot on the Scoville heat scale; most people are not able to tolerate the heat.

Prik kee nok is used mainly in Thai soups although it is also used in stir-fries by Thais who like particularly spicy food.

From my observation, few people will actually eat all the chilis but rather sample one or two and pick out the remainder to the side of the plate.

In this website, very few recipes are prepared using these small chilis and they will be explicitly referred to in those recipes.

Be careful when ordering or choosing chilies online or at the market because they are regularly misdescribed and misnamed.

If you are in the US, be aware that Thai chili is sometimes taken to mean these small chilies, whereas most Thais (including us) will mean the Thai Jinda Chilies which are significantly less hot.

It is similar in size and shape, though perhaps a little smaller, than the Prik Kee Nok chili.

It has a similarly disgusting name which transliterates to mouse dropping chili, referring to its small size and shape,

It is used where the dish will be made for someone wanting the spiciest serving and pretty much used interchangeably with prik kee nok.

It is slightly hotter on the Scoville scale.

There are various types of dried chili in Thailand which are simply dried versions of some of the above chili types.

You can generally tell which chilies the dried versions come from and these are mainly either Dried Thai Jinda chilies or the larger Dried Chili Spur (Chi Fah).

The dried Jinda chilies are much hotter than the Chi Fah chilies.

It is personal preference whether you choose to eat them or more commonly set them aside.

The smaller, hotter dried Jinda chilies are used to increase the heat in quite a lot of Thai dishes. You will often see them used in soups such as Tom Yum or in salads such as in Spicy Som Tum.

The larger dried chilies are also used, sometimes instead of the dried Jinda chilies to give a lesser heat. They are also used partially to rehydrate in to make sauces such as Som Tam sauce and to color other dishes.

To some extent, they are interchangeable and used determined by the heat level that is required in the dish by the chef or cook.

Substitutes for Dried Chili: If it is just heat you are looking for then you can substitute chili flakes or ground chili pepper but neither will provide the look of dried chili which is a large part of the reason they are included in Thai dishes in the first place.
SHU: Varies
Spice Level: Medium to Hot

One of the other common ingredients is fresh green peppercorns. These are usually added in small bunches and whilst not chilies, we are including them here because they are another form of spice that gives quite strong heat in many Thai dishes.

You might note that they share the word พริก which means pepper with the various types of chili pepper.

In fact, Thai cooking used various forms of pepper and peppercorns which were grown in nearby India as well as locally, instead of chili before chilies were imported into Thailand by traders a few hundred years ago.

Chili has overtaken the use of pepper as the mainstay of Thai cooking as it is loved by most Thais who associate chilies as their national spice, history aside.

Use of Green Peppercorns in Thai Cooking

Green peppercorns are found in many dishes, particularly Thai soups and curries as well as dishes such as Phad Cha which is a hot dryish curry, green curry, Klua Kling curry, and many others.

There is also a green peppercorn dip made by crushing green peppercorns, red Jinda chili and garlic. It’s great because it helps you sweat which in turn cools you down. I wonder if that is the reason we Thais are so in love with chili.